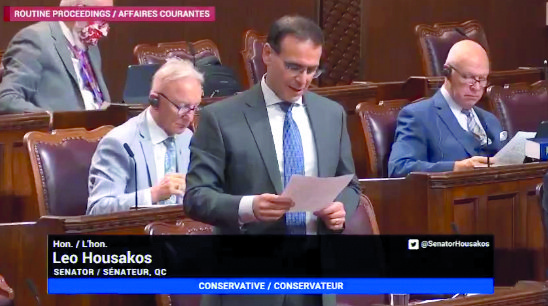 Has Canada’s Senate shut down Liberal Heritage Minister Steven Guilbeault’s attempt to establish tighter controls on the Internet with Bill C-10?
While some social conservatives have been stridently denouncing the proposed federal law as an outlandish intrusion into the private lives of Canadians, Bill C-10 may still die of its own natural causes, since members from both sides of the Senate floor agree the bill needs more work before being enacted.
Objections from the Tories
However, some still believe the Liberal government will revive the bill should the Liberals receive a new mandate in an election. Although the Liberals, the NDP, the Bloc Québécois and the Greens all support Bill C-10, the Conservatives remain the lone hold-out.
The other parties’ seeming unanimity led long-time Tory MP Pierre Poilièvre to comment during a House debate in June that the underlying reason they all support Bill C-10 isn’t actually difficult to understand.
‘The state above the citizen’
“They’re all the same,” he said. “They all believe in putting the state above the citizen. That’s the core of their ideology. They believe in worshipping at the altar of the state – that big government should decide and that the people should just follow.”
In the Senate, one of the strongest opponents of Bill C-10 has been Montreal-based Senator Leo Housakos. “C-10 is a very feeble attempt on the part of the Liberal government to reform the Canadian Broadcasting Act,” he said in an interview with Newsfirst Multimedia. (Enacted in 1991, the Broadcasting Act defines broadcasting policy in Canada, including the role of the CRTC and the CBC/Radio-Canada.)
Attack on freedom, he says
According to Housakos, the Liberals had initially described Bill C-10 as a piece of legislation meant to regulate inconsistencies in Canada’s telecommunications domain, while taking into account the emergence of powerful web-based digital technology and online platforms over the past two decades.
“Unfortunately, somewhere along the line this bill has gone haywire,” Housakos added. “It’s become an adamant attack on freedom of speech. We’ve seen this government take out clauses that protected freedom of speech.
‘Irresponsible’ legislation
“They’ve given draconian authority to the CRTC to be able to determine what Canadians watch, what they post on the digital web, in places like Twitter, YouTube, Facebook and so on and so forth. And if there’s something we cherish as Canadians it’s freedom of expression, freedom of speech. I think it’s part and parcel of our democracy.
“It’s regrettable that the Trudeau government has decided to put forward this very irresponsible piece of legislation, which in addition to attacking freedom of speech, it also essentially is taking the digital modern era of communications and is trying to drag it back to an antiquated time of broadcasting, instead of taking the antiquated broadcasting platforms and telling them to adjust themselves to basically work within the confines of the modern era.”
Good for Canadian content
Housakos suggests that a law like Bill C-10, which he says could effectively suppress certain portions of the internet, such as YouTube, would only end up being counterproductive, and could inadvertently undermine Canadian content.
“Let’s remember that Justin Bieber was discovered on YouTube,” he said, adding that Indo-Canadian comedian and talk-show host Lilly Singh was also discovered on the web-based video medium. (Singh has been ranked as one of the world’s highest-paid YouTubers, with reported earnings at one point of $7.5 million.)
An opportunity, says Housakos
“This opportunity to post Canadian culture and give it access to world markets is something we should embrace, not something we should muzzle or try to kill.”
Although Bill C-10 has reached third reading in the Senate, Housakos said the Senate has “made it abundantly clear to Mr. Guilbeault and the Trudeau government that this bill in its current form has no chance of passing. We’ve punted it to the committee on transportation and communications in the Senate where it’s going to receive a very thorough and comprehensive review.
If there is an election…
“And the government can take this to the bank: there will be severe amendments coming back. If there isn’t an election by fall, then of course the bill will die on the order paper where it deserves to die. But if there isn’t an election and we come back in the fall, the government has to be ready to accept drastic amendments.”
According to Housakos, the Senate members reacted to Bill C-10 in a non-partisan fashion. While the largest bloc in the Senate consists currently of Liberal government appointees, he said “a multitude of voices from caucuses on all sides of the chamber agreed this is a bill with many holes.”