McDonald's Canada announced Friday that it temporarily shut its restaurant at 37 Samson Blvd. in Laval after an employee reported having tested...
More

Thousands of people with Greek roots from all over Quebec got the opportunity to return to their cultural origins on Canada Day weekend when the Laval Greek Orthodox Community held its annual Hellenic Summer Festival 2016 at Holy Cross Church in Chomedey.

Dennis Marinos, president of the Laval chapter of the Hellenic Community of Montreal, said the mostly good weather probably encouraged people to come out to this year’s event, compared to last year when rain put somewhat of a damper on things.

The Laval Hellenic Summer Festival is one of the biggest Greek cultural events that takes place in Quebec each year. People arrive from as far as Ottawa and Toronto eager to meet and greet old friends and members of their families. In Laval there are an estimated 39,000 Greek residents.

All proceeds from each year’s festival support local Greek educational needs, as well as charitable causes in the Greek community. Stirring performances of traditional Greek dancing were given by students attending schools supported by the Greek Orthodox community of Laval. Another highlight each year on July 1 is a Canada Day celebration with a large Canadian flag cake. 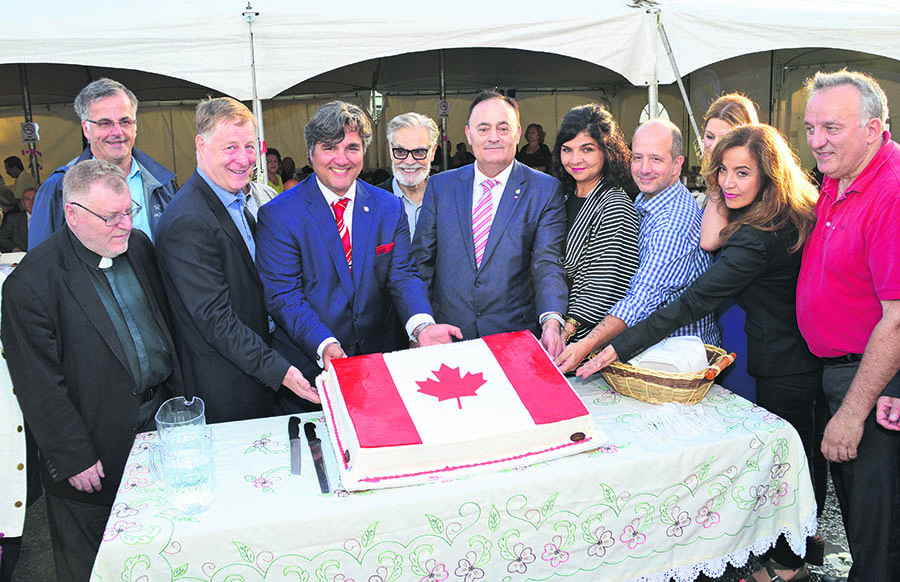 Accompanied by city councillors Vasilios Karidogiannis and Aline Dib, Mayor Marc Demers alluded to the weather which took a brief turn for the worst towards early evening on July 1. “This year I would like to say, unfortunately, there is rain, but rain is not a municipal jurisdiction,” he said, while adding that “the sun is.” Shortly after, the rain stopped and the sun came out again.

Ouellette also alluded to the weather. Noting that the Laval Summer Festival often opens with rain on the first day, he correctly predicted that “for the rest of the weekend we are going to have beautiful weather.” Ouellette pointed out that the largest community of Greeks in Quebec resides in his riding.

In an address delivered by Nassif, she said: “Canadian society, by engaging with the world and experiencing other cultures, has helped shape the communities by those who belong to them. We do well to honour our shared histories and engage with all people. Together we walk forward united with a common purpose and a respect for where we came from.”

El-Khoury for his part said: “It is with pride and honour that I stand here as a Greek Orthodox born and raised in a Greek church in Lebanon. I am so happy, I am so proud to be with the Greek community here in Laval. I would like to mention to you that Canada is proud of your community, the way that you contribute to our society which is a society of diversity.”

El-Khoury also alluded to the local Greek community’s contributions towards helping make Laval “a clean city, an honest city, an uncorrupted city and a city that is friendly to the environment. Let us work together to make Laval a good city in our beautiful province of Quebec, but let us always try and work towards keeping our beautiful province of Quebec always in a Canada that is united forever.”

McDonald's Canada announced Friday that it temporarily shut its restaurant at 37 Samson Blvd. in Laval after an employee reported having tested...
Read more
Breaking News

Quebec's provincial police force, the Sûreté du Québec, said in a statement issued on May 27 that...
Read more