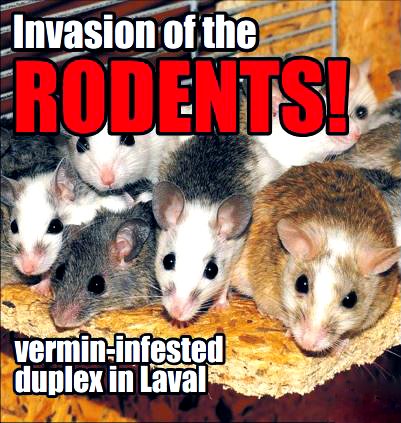 Garbage piled to the ceiling in a Chomedey duplex. Books, magazines, food trays, decaying food, discarded packages, and more, filling chairs, tables, beds; some rooms are so stuffed you can’t walk through them.

The home, 904-906 Emerson Street, is an ideal place for roaches and rats to breed, and the pests made their way through walls into neighbors’ homes. Neighbors are awakened by rats scratching on the walls and scurrying in the ceiling of their living quarters. “Imagine having to live next to a place full of trash. That’s what we have had to deal with,” said Vicky Zannis, who lives in the adjacent duplex whose apartment is now infested with rats.

In June 2020, the City of Laval was notified by Mrs. Zannis, that an elderly female home owner who lived in squalor conditions had been taken into a care facility. The CLSC nurse called an ambulance since the woman was suffering a dangerous infection. Upon their arrival, the ambulance attendants refused to enter her residence. Mrs. Verna Peters had to drag herself out of the home.

Mrs. Zannis states that city officials have done little as the home has deteriorated, overflowing with junk and mice since her call to 311 in December 2020. A second call was placed on January 15, 2021.

Mrs. Zaphira Gregoriades who is responsible for Service de l’Environment et Ecocitoyennete (Environment sector) of the City of Laval opened the file. She informed Mrs. Zannis that the file is with the public curator, that she would request that Mrs. Peters and her granddaughter to call an exterminator. She didn’t hear from her since that communication in December. On February 16, Mrs. Zannis emailed Mrs. Gregoriades to alert her of the unacceptable living conditions she was subjected to. No response.

Mrs. Zannis resorted to hiring a lawyer to resolve the situation which has cost her close to $4K in legal fees, to date. She also got an exterminator for her home, but the mice are still living there since they transfer from next door. Problem unresolved.

An exterminator was sent to the infested Duplex at 904-906 Emerson, but the exterminator provided a report that there was nothing to do unless the entire home was gutted. Trapped again.

“Since this case was turned over to the Courts, it is now a civil law case; it has to do with the neighbor, and it’s not a City problem.” Mrs. Gregoriades expressed to TLN by phone. She wished not to discuss further. However, Mrs. Zannis acknowledged that in the only communication exchanged between them, Mrs. Gregoriades told her that mice are harmless, there’s no danger, “mais madame c’est seulement des mulots. Ce n’est pas dangereux.” Mrs. Zannis told TLN that she was in disbelief over this response.

Mrs. Zannis also turned to Chomedey City Councilor Aglaia Revelakis who advised her to call an exterminator. She never heard from her again. However, she was contacted by Peter Karampatos, Revelakis’s political aid, after TLN’s investigation in the matter on March 31st. Karampatos explained that all matters must go through the General Directorate, who ensures that everything works correctly. He also assured Mrs. Zannis, that they will assist her when she’s ready. He informed TLN that an elected official can’t get involved without consent.

Under pressure to relinquish possessions, those with the affliction can withdraw, making intervention even harder as is the case for the owner, 82-year-old Mrs. Verna Peters who is now residing in a CHSLD. Her case has gone to court and been turned over to “le Curateur public” or public trustee/guardian for the protection of incapable persons.

The Ville Laval Public Relations Office contacted TLN after learning of our investigation. Anne Marie Braconnier stated that Mrs. Zannis has made the request for intervention at the wrong place. The City has no business in this issue of vermin according to Braconnier. It’s a civil case in which Mrs. Zannis must take action against her neighbor. The City has no powers over Mrs. Verna Peters.

According to information gathered by TLN, the citizen got little or no assistance in this case.

Out of desperation and not knowing where to turn, Mrs. Zannis was referred to Laval City-Councilor Michel Poissant who told TLN he intervened as best as he could. The Public Curator received the file last week at the same time as Michel Poissant’s intervention.

According to Vicky Zannis, “Mr. Poissant he was the only one who took the initiative. “Where are the City reps? Why should it cost me when it’s someone else’s mess?” This administration is delinquent – they don’t respond to citizens’ needs. They’re all show without substance,” she told TLN. “I’m totally dissatisfied, never asked for anything, pay my taxes, and now that I need a service, I’m totally ignored. Who’s going to reimburse me?” The problem became bigger.

An attempt to rescue

“It is an unfortunate set of circumstances,” Michel Poissant disclosed to TLN. Alerting us to the situation, he described the dangerous condition of the now vacant home. “As you can see by the pictures, the interior property is quite unkempt. There is garbage and feces, bags that have been torn open. The home is also infested by a colony of rats, just part of multiple problems. There are droppings and whatnot throughout the rooms.”

Poissant sent the disturbing pictures to Jacques Ulysse and Martine Lachambre of La Direction Générale. They responded that it’s a complicated file. Poissant went further by asking a personal lawyer-friend to look into the case. Zannis said the CHSLD brought in an exterminator. The expert said the lack of maintenance of the apartment invited rodents to live and breed, conditions showed a well-established colony of vermin.

“To complete the circle of problems, the owner has no family members to deal with cleaning up the interior and exterior of the home. Mrs. Peters has a 66 year-old son who lives in the bachelor apartment in the basement; he is unstable and in no condition to conduct any sort of business for his mother or himself.”

“That’s another complicated issue,” stated Ilana Dayson, upstairs tenant. She told TLN she’s suffering the same consequences as Vicky Zannis since the mice are also in her unit. She too contacted Zephira Gregoriades at City Hall. She was told to go to the Rental Board. “The City doesn’t care,” Dayson stated. TLN asked why she hasn’t moved. ”I suffered Covid-19 and it was a difficult time to move. But I will definitely move as soon as I find a suitable apartment for me and my son. We’re living a nightmare, and my son can’t sleep with all the noise in the walls,” she stated.

In need of resolving

At press deadline, The Laval News has managed to ascertain the following developments related to this problem in need of resolution:

Mrs. Zannis informed TLN that she believes that since our investigation, her lawyer is quickly moving forward to resolve the ghastly situation. The city’s Public Relations Office, in a telephone conversation with TLN, stated that this has become a civil law case and the city will not be involved.

However, Ville de Laval has acknowledged the appalling state of the lodging but its hands are tied because the file is in the curator’s hands. The lawyer’s assistant, on request of anonymity, made the following statements on behalf of the legal office: “The Social Worker, Marie Christine Rattel, is in close contact with Mrs. Peters and makes decisions for getting the house cleaned out.”

TLN reached out to her, but no response had been received at press time. The legal office involved in this case told TLN that it doesn’t believe the City of Laval is at fault. The lawyer’s office confirmed that it had not contacted Santé Public and can’t speak on Mrs. Peters’ medical state, nor have they met Mrs. Peters or her son. According to the lawyer’s assistant, the city has ordered the place cleaned up, file number 54017014244205. The lawyer did not reveal a time-line for the file’s advancement.