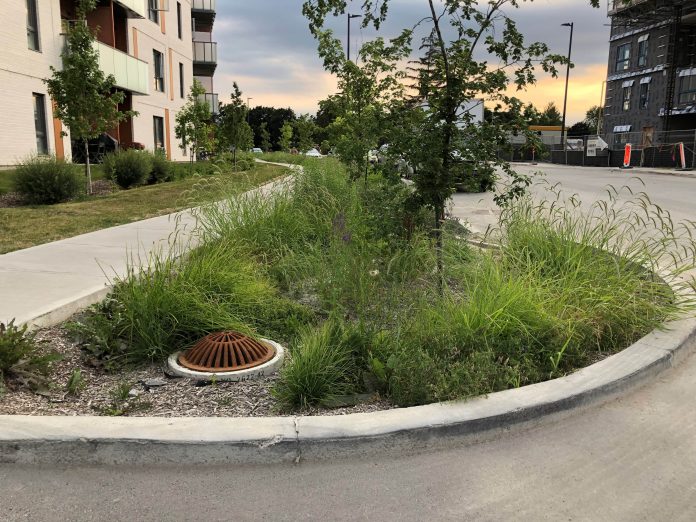 Traffic calming and better waste-water management combined in one

This fall in Chomedey, the City of Laval will be starting the implementation of sidewalk protrusions, which are special concrete areas built next to sidewalks to absorb water while encouraging the growth of shrubs and small trees.
While the protrusions will serve the purpose of calming traffic, they will also be playing an important role in helping to control excess rain water and keeping air temperatures down in areas known as “heat islands.”
Traffic/water management
The Quebec government recently awarded the City of Laval a $498,350 subsidy to carry out this project. The provincial program is part of a larger plan to create a greener economy in Quebec.
In all, the city will be implementing 34 similar projects in other neighbourhoods, including Albert Murphy St. between Saint Martin Blvd. and Le Carrefour, as well as on Berlier St. between Le Corbusier and Industriel boulevards.
According to the city, the sidewalks protrusions act as traffic calming measures by inciting car drivers to slow down in their vicinity because of the protruding shape. It is believed that in directing rain water towards these sidewalk devices, more water will be retained naturally and the sewer system won’t be overworked.
Innovative thinking
“The traffic calming measures put into place are adapted to each location,” says Laval city councillor and executive-committee member responsible for public works and engineering Ray Khalil.
“This implementation of draining and greened-over protrusions is a good overall example, while also being an example of innovation: for while the are dealing with traffic issues and embellishing streets, they also allow sectors to be greened and heat islands to be reduced, while favouring the management of rain waters.”
“I am proud to see cities like Laval mobilizing and developing innovative solutions for better rain water management,” says Quebec Municipal Affairs Minister Andrée Laforest, who was instrumental in granting the subsidies to the city.
Efforts please Quebec
“Not only does this allow for the resilience of the entire community to be increased against the new climate warming realities, but it also contributes to the development of sustainable, healthy and quality living environments.”
“I am happy to see that successful initiatives are being put into place by the municipalities with the goal of encouraging sustainable management of rain water,” added Benoit Charette, Minister of the Environment and for the struggle against global warming.
“It is by committing to accomplishing actions like these that we contribute to a future that is greener for all Quebecers,” he added.
Useful facts:
• Since 2017, the City of Laval has been accelerating its implementation of traffic calming measures.
• In 2021 and 2022, 700 additional speed bumps around parks and schools to increase safety for young Laval residents.
• Over the past few years, several protrusions have been implemented by the city.
• With draining greened over protrusions, traffic calming and water management are combined into a single effort.
• The greened-over, draining protrusions reduce water headed towards Laval’s sewers, thus improving the cleanliness of the water that ends up at the end of the system for cleansing and purification.