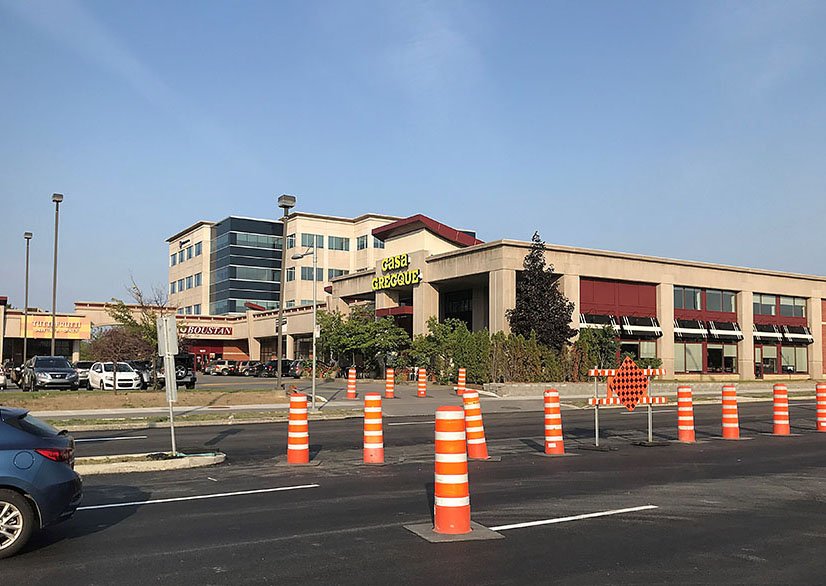 A little more than a year after a restaurant operator on a stretch of Daniel Johnson Blvd. in downtown Laval complained that a lengthy program of road improvements by the city was literally driving away business, more business owners are coming forth to say they’ve had about enough of the situation.

As reported by the Laval News in its June 28, 2017 issue, Christine Stergiou, who operates the Eggsquis breakfast restaurant on Daniel Johnson Blvd, had already been waiting at least two years for the City of Laval to complete road work along a stretch between Saint Martin and Souvenir boulevards.

Last week, several other Daniel Johnson Blvd. business owners came forth with similar complaints, although now with a more serious twist: a 30 per cent drop in customer traffic that some blame on the city’s slowness – as well as its seeming disregard for the well-being of Laval’s small and medium-size businesses.

“We didn’t get a warning – we didn’t receive any indication of how long this would last,” said Peter Chiotis, who operates the Casa Grecque restaurant at the corner of Daniel Johnson and St. Martin Blvd.

“If at least they had given us an estimation of what’s happening. That way we could arrange with our staff. Because I’m bringing in, you know, employees to do their job, and unfortunately we don’t have many clients coming in and I have to cut their hours. This is all just a mess.”

Chiotis was one of several merchants in the area interviewed by the Laval News who maintained they’ve seen similar drops in customer traffic since the program of street improvements was first started by the city. The street, which used to consist of a single lane, has been enlarged and now has two separate lanes for north and southbound traffic.

But with that came the necessity of installing a lot of new infrastructure, such a street lighting and underground conducts, accounting to a large extent for the delays.

Business down a third

“I’m losing 50 to 100 customers a day,” Chiotis said, noting that the loss represents up to a third of Casa Grecque’s usual business. He said the situation has been deteriorating since around 2013 when the city first undertook the project to widen Daniel Johnson Blvd.

While the city has previously claimed that Hydro Quebec was largely to blame for the delays because the electric utility was slow installing infrastructure on Daniel Johnson Blvd., Chiotis isn’t buying that excuse. Between the city and Hydro, he said, their actions have taken a serious toll on his business.

Apart from the fact that time-pressed customers probably feel much less inclined to come by Casa Grecque because of the huge volumes of traffic blocking the restaurant parking lot’s entrance, he pointed out that Casa Grecque’s outside terrace, which was a major customer draw at one time, has become much less usable because of the dust churned up by work trucks and overall congestion.

“The dirt that comes on our terrace,” he exlaimed. “And nobody’s going to come only to listen to some workers drill, or having a cloud of dirt come in your face. That’s also costing me money to clean this all up every single time.”

While Chiotis admits that his business is likely to benefit from the improvements (including some nearby high-rise residential condo development), there are times when he wonders if his restaurant will survive all the turmoil simply because of the time it’s taking.

At the Place 3000 mall where Casa Grecque is located, other businesses contacted last week by the Laval News also reported significant drops in client traffic since the Daniel Johnson Blvd. road work started.

No time for traffic woes

Hassan Chehouri, manager of the Boustan Lebanese fast food restaurant at the mall, said they’ve seen a decline in clients. “People are having a hard time coming in to the parking – especially at lunch time,” he said. “When they’ve got a half-hour to eat, they’re not going to waste it sitting in traffic.”

Salim Bohsali, owner of a pastry shop and catering business at Place 3000, has only been open for the past four months. But he said he found it difficult doing business because of the street work, as well as a recent jogging marathon which partly closed the street and disrupted access to the mall’s parking area. “You know when you lose $10,000 in a weekend, it’s not easy to make it back again,” said Bohsali.