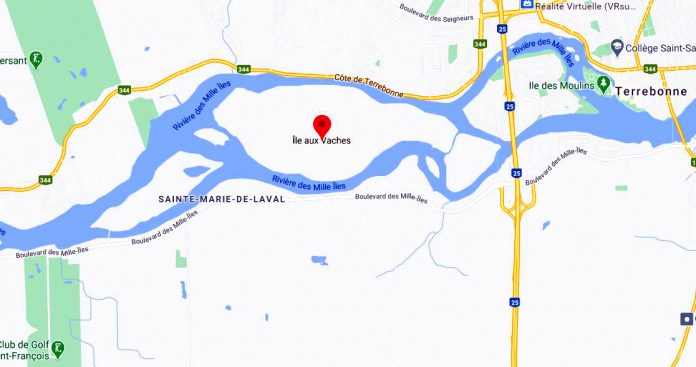 The City of Laval announced last week that it is buying two islands situated in the Rivière des Mille Îles in order to better protect them environmentally while preserving them for future public use.

Located just north of Île Jésus below Terrebonne, Île aux Vaches and Île Saint-Pierre have long been coveted by environmentalists and land preservationists as they are home to a good number of rare or endangered species of flora and fauna.

The two islands, part of the Saint-François archipelago, are also known for their woodlands, shores, marshes, swamps and grasses, as well as for an abundance of amphibians and large mammals. Over the past several years, the environmental group Sauvons nos trois grandes îles had been lobbying intensely to have the islands declared protected territory.

A decade ago, they submitted a petition with more than 41,000 signatures to the Quebec National Assembly. The province’s department of Municipal Affairs and Housing contributed $7 million towards Laval’s acquisition of the two islands.

Will be used for activities

The rest will be coming from land sales worth $10 million. The city plans to use the islands for ecologically-sound activities such as bicycling, paddling and hiking. The islands were previously owned by Montreal-based Monit Investments. The company will be paid $4.9 million as part of the deal.

‘I admit that I was stunned to learn the good news,’ said Huguette Larochelle, president of the organization that spearheaded efforts to buy the islands for eventual public use

In a common statement issued on Oct. 26, Mayor Marc Demers, Municipal Affairs Minister Andrée Laforest, and Environment Minister Benoit Charette who is also responsible for the Laval region, said the acquisitions would cost a total of $21.9 million, some coming from Quebec, while other sums would come from the sale of city-owned land on des Pélicans St. in Duvernay.

“The purchase of these two islands confirms a commitment by the city with regards to protection of the environment,” the City of Laval said in the statement. According to the city, a plan will be developed for the future of the islands.

“We are very proud of how this project worked out,” said Mayor Marc Demers, noting that buying the islands was one of his first electoral pledges when he first ran for office in 2013. “The purchase of these two islands represents two giant steps forward with regards to protection of the environment.

“I would like to thank the government of Quebec, especially the Ministry of Finance and the former minister responsible for Laval, Eric Girard, as well as Municipal Affairs and Housing Minister Andrée Laforest, for contributing largely to turn this project into a reality,” the mayor added.

Municipal Affairs and Housing Minister Laforest said, “We will remember an announcement like this for a long time. It isn’t every day that two large islands located right in the middle of the metropolitan Montreal region are returned to the public. This is a $7 million contribution from our government that will be benefiting everyone from Laval and I am very proud of this.”

Explained Charette, “Residents of Laval will be able to benefit from these places which are well-endowed in terms of their eco-systems. At the same time, this is very good news for all the community, and I salute the City of Laval for its initiative and its commitment in protecting our environment and our green spaces. These islands will add to the richness of the Laval territory, while becoming part of the heritage for future generations.”

According to the City of Laval/Quebec government press release, Sauvons nos trois grandes îles started lobbying in 2008 for the public protection of the islands. The group, led by Huguette Larochelle, felt vindicated by the outcome of its efforts after 12 years.

“I admit that I was stunned to learn the good news,” Larochelle said. “The purchase of ’île aux Vaches and île Saint-Pierre marks an important milestone in my commitment, going back to the early 1990s.

“As you may imagine, over the past few decades we presented this project to several elected officials at all levels of government,” she continued. “And so, it seems to me only natural to warmly thank Mr. Demers, Mrs. Laforest and Mr. Charette. At last we can say that present and future generations will be able to celebrate an exceptional environmental heritage.”

Mayor Demers said he took it upon himself to personally call Larochelle in order to deliver the good news. “After nearly 30 years of working towards this, her efforts have borne fruit,” he said. “At this stage, I think Mme Larochelle could teach courses in university on determination and citizens commitment.”