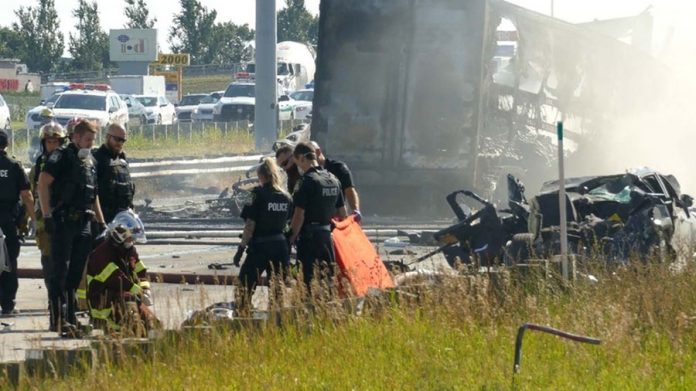 (CNW) Quebec provincial police are still trying to determine the cause of a deadly domino collision on Highway 440 on the afternoon of Monday August 5th.

Around 3:40 p.m., a small car collided with a semi-trailer truck on the westbound section of highway near the exit to Highway 15. The two vehicles then hit a second truck, starting a pileup involving another six vehicles.

Police have collected statements from witnesses, but are asking anyone who saw the collision or filmed video to contact them, which can be done anonymously, at 1-800-659-4262.

Quebec truck drivers are demanding action after the fiery collision between two trucks and seven other vehicles on Highway 440. “The problem is it’s coming all from four lanes to one lane to an exit to go on a service road and, after, go back to another entry for the 15 North,” longtime truck driver Daniel Beaulieu explained.“So, everybody is getting to the same place. That’s why there’s a lot of pileups, a lot of backup, and it’s really dangerous and should change. It has to be changed.”

Beaulieu noted there were public consultations in 2017 to discuss the road conditions in Quebec. He argues the Highway 440-15 North intersection isn’t the only problem area.

“The 640-15? Same problem,” he said, adding that he is demanding more action from the provincial government.
“I think the government should look at itself. Why there was no action for the last 10 years?” Beaulieu said.
“If we don’t do nothing, there will be a lot of deaths, and that’s exactly what happened that afternoon. Now, all those poor families, this morning with their losses. I think it’s horrible.”

Bonnardel: Painted line to be extended

“My first thoughts go to the victims and their families,” Quebec Transport Minister François Bonnardel said whwn he visited the trajic site Tuesday August 6, alongside Laval Mayor Marc Demers.
Bonnardel said the ministry will look at provincial police’s report of the collision to see what improvements can be made, but in the meantime, the painted line separating the service lane from the highway would be extended.

He agreed that the intersection was flagged as a place of risk — the scene of a dozen accidents since 2013.

One of the changes Bonnardel wants to make is extending a double line to elongate the part of the highway where motorists will be prohibited from changing lanes.

The minister said he hopes to change driver behaviour but will wait for the Sûreté du Québec’s (SQ) investigation to determine what other actions should be taken.

While he acknowledged the stretch of road was built decades ago when congestion was not as severe, Bonnardel said it is not any more dangerous than other interchanges in the Montreal area.

“The city will work in collaboration with the ministry to find solutions,” Demers said.