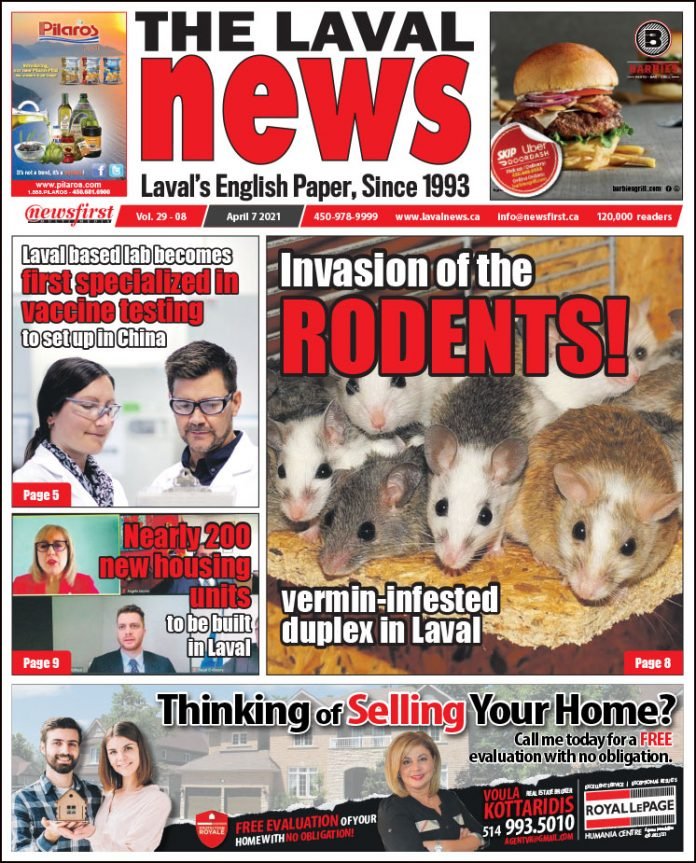 ‘What is the city doing to protect its citizens from this situation?’

In question period during the May 4 webcast of Laval city council’s monthly meeting, there was a followup to the rat infestation issue on Emerson St. in Chomedey, which was first raised in the Laval News’s April 7 issue.

As reported in our article (‘Neighbours of vermin-infested duplex plead for help’), a multi-unit house on Emerson became an ideal place for roaches and rats to breed, while pests made their way through walls into neighbors’ homes.

Garbage was piled to the ceiling, while books, magazines, food trays, decaying food, discarded packages and more filled chairs, tables, beds, and some rooms were so stuffed you couldn’t walk through them.

“Imagine having to live next to a place full of trash. That’s what we have had to deal with,” said Vicky Zannis, who lives in the adjacent duplex whose apartment was infested with vermin.

Zannis had told the Laval News that city officials had done little, while the home next door deteriorated, overflowing with junk and mice since a call she made to 311 in December 2020, followed by a second call in January 2021.

During the May 4 council meeting, a member of the Zannis family questioned the administration about its less than satisfactory response to the situation. They said that only city councillor Michel Poissant (Vimont) had responded satisfactorily and tried to meet their needs.

Why no action taken?

“No action has been taken except for two visits by the exterminator,” they said. “When will the place be clean? My question again: What is the city doing to protect its citizens from this situation? Why is the city not addressing this situation which has affected three families? Do we not matter as human beings?”

‘Do we not matter as human beings?,’ says neighbour impacted by infestation in neighbour’s dwelling

Poissant said, “This is a very touching and human situation that these people are going through.” While a court has ruled that the Quebec Public Curator needs to intervene because part of the problem involves a person with diminished mental capacities, Poissant suggested that the city should go back before the judge and get permission to enter the dwelling to clean and disinfect it so that the matter can be settled.

“What Mme Zannis is doing today is a plea to the mayor from the heart, a cry for humanity,” he said. “As for myself as a member of council, I am saying to the administration to please make superhuman efforts – it’s nearly a year that this situation is going on.”

Deputy mayor Stéphane Boyer said, “Of course, it’s a very sad situation. I think nobody should be living through that. It’s deeply unfortunate. From what I understand of this file, the city would like to help, but cannot do it on legal grounds.”

According to Boyer, city inspectors visited the dwelling in question to conduct a cleanliness inspection and wanted to intervene to force the occupant to make the premises clean. “Unfortunately, Superior Court prevented the city from intervening, judging that the person there was incompetent. And so, it is the Public Curator of Quebec which protects people judged incompetent that has taken over the dossier.”

Boyer said the city can’t take legal action against someone “that has mental issues or that is incompetent to make their own decisions. Effectively, it is a situation that is very unfortunate and that shouldn’t happen. We would like to intervene, we have tried. But unfortunately, it is the Superior Court of Quebec that is stopping us.”