LAVAL NEWSServing Laval Since 1993
More
Home Local News ‘Welcome to Laval: where the snow gets picked up along with the...
Facebook
Twitter
Pinterest
WhatsApp
Linkedin
Email

Within 200 feet of the corner of Guénette and l’Écuyer in Laval’s Saint-Martin district early one Thursday afternoon recently, the street was littered with bits of trash here and there and hastily discarded garbage pails – the aftermath of a snow removal crew’s visit just a few minutes earlier.

But what the Laval News just missed witnessing first-hand by a few seconds, according to nearby resident Natale Polito, was how the snow crew went about combining their usual job blowing the white stuff from the street curb into trucks with a second not so usual task – taking away the garbage – which is a job normally handled by the trash collectors. 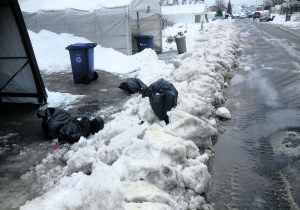 Polito agreed that if the City of Laval has decided to save money by doing two things at once, this would certainly seem to be an original if rather odd example of it. “Two in in one,” he said, laughing. “Welcome to Laval: where the snow gets picked up along with the garbage.” Nonetheless, Polito recorded the scene from beginning to end with his smartphone.

While according to Polito the snow crew left the garbage pails behind, they damaged them. But he insisted that entire bags of garbage, which had been put out for collection by the trash crew, were blown, along with snow, into the rear bins of snow removal trucks to be transported (presumably) to a snow dump. 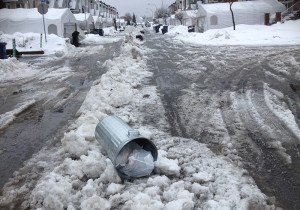 While noting that some of the bags were pushed to the curb by a snow crew member, “most of them were going inside the dump trucks to be brought to wherever they dump the snow, around Daniel-Johnson and Saint-Martin (boulevards),” added Polito.

Not the norm, says resident

But then, recycling bins were another matter. Referring to another employee, he said “that poor guy had to come out of the truck and place them – because they were all over the place.” Polito said it’s the first time he’s  seen anything comparable happen, even taking into account that garbage collection and snow removal operations were taking place around the same time.

“Usually when there is snow removal the day of garbage collection, when it’s on either side, the crew usually comes before they plow the snow and they push the bags and the garbage pails into the centre or on the sides so that the plows don’t touch the garbage.”

Laval city councillor Aline Dib, who represents Saint-Martin district, said she wanted to view Polito’s still photos and video footage before deciding along with public works officials just what happened. “We will do what we have to do and check what is wrong and what is going on in this situation,” she said.

Woman dead after being hit by car on Montée Montrougeau

Executive-committee approves grants to 4H and for conservation