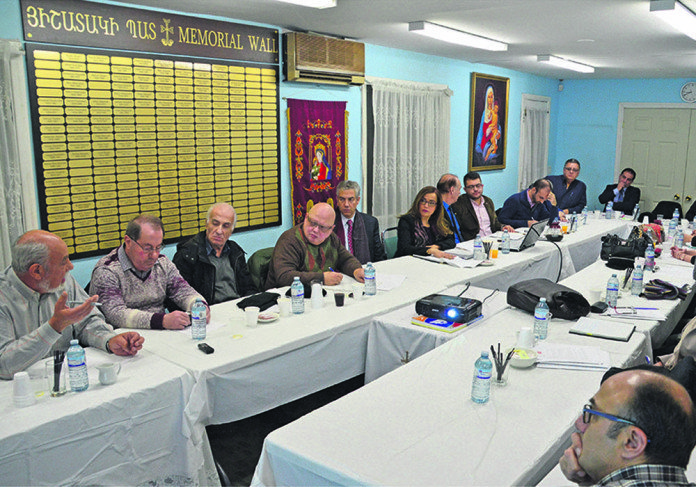 A public consultation held last week by Vimy Liberal MP Eva Nassif to determine people’s wants and needs for the upcoming federal budget led to a lively round of discussion by a group of more than two dozen of the riding’s constituents.

“As we promised an open and transparent government, we are consulting the citizens across the country,” Nassif said in an interview with the Laval News. “This is what the Minister of Finance had promised. Mostly we are here to listen to business owners, to citizens and to everyone’s point of view as to what they would like to see in the 2016 budget. We want to know what they want as priorities.”

Nassif said the budget will include things such as placing environmental sustainability at the heart of Canada’s resource sector, and supporting growing firms to help them secure the talent, capital and strength they need to realize opportunities in the global marketplace.

In addition, she said the budget will contain measures ensuring that Canada’s tax system is competitive for foreign investment while attracting global research and development mandates, as well as elements to encourage a closer relationship with the provinces for a skills and labour strategy emphasizing better participation of under-represented groups.

Among those attending the meeting at Holy Cross Armenian Church on Saint-Martin Blvd. were Laval city councillor Sandra Desmeules, along with councillors Daniel Hébert and Pierre Anthian. Desmeules, who sits on the executive-committee, said the city’s number one request to the federal government is that it provide financial support to deal with an “emergency” in social housing.

“The City of Laval has an immense backlog in providing social housing whether it be for young people or families or people 65 years of age or older,” Desmeules said. According to Desmeules, the city needs 3,000 units of social housing. “We have some projects underway, but we need federal support. In the past, we held negotiations with the former government. Unfortunately the money was not forthcoming.”

In contrast, Desmeules said she and other city officials were pleased with what they are hearing from the new Liberal government, but that a working relationship needs to be developed so that ideas can be transformed into reality. “We have to work together with the federal government, as well as with the Quebec government,” she said.

In a speech prior to beginning the discussion, Nassif said she would focus on the economic context leading towards the upcoming budget. “The global economy is weak, and Canada’s economy is facing an uphill battle,” she said. “The period since the end of the 2009 recession has been characterized by low global economic growth.

“The main reason for the decline in GDP in the first half of 2015 was sharply lower oil prices. But the good news is Canada is facing these challenges from a position of strength, despite the fact that the last number of years have been characterized by low economic growth. There are untapped opportunities to further improve Canada’s economic performance.

Employment to be key

“With the demographic changes that are expected, continued strong labour force participation will be key to sustaining growth,” she continued. “Canada is already doing well here, but there is room for improvement. Canadians with disabilities, indigenous peoples, women with young children, and recent immigrants are all under-represented in the labour force. Now, more than ever, we need a plan to grow our economy, support the middle class, and return to long-term, sustainable growth.

“Maintaining our position of strength is not enough to grow the economy,” said Nassif. “Growth will absolutely require investment. We also need to be sure we’re investing in people. Specifically, in the middle class and those working hard to join it. We simply can’t call ourselves prosperous as a country if our middle class is struggling.”

Nassif said that in the budget, the government will introduce the new Canada Child Benefit, another measure that will provide increased support to nine out of 10 families and assist hundreds of thousands of children currently living in poverty. “In contrast to the existing regime, the Canada Child Benefit will be simpler, more generous and tax free,” she added.

“Put together, these measures will help strengthen the middle class, putting more money in their pockets to save, invest and grow the economy. More broadly, they will help grow our economy in the context of a difficult global economic climate so that all Canadians benefit.”

Share
Facebook
Twitter
Pinterest
WhatsApp
Linkedin
Email
Previous articleAlthough the Action Laval councillors each earned a base amount of around $30,000, the opposition’s former chief of staff made $88,000 in annual salary
Next articleMother and daughters duo from Laval caught in Grandparent Scam