City outlines how it strives to give good snow removal service 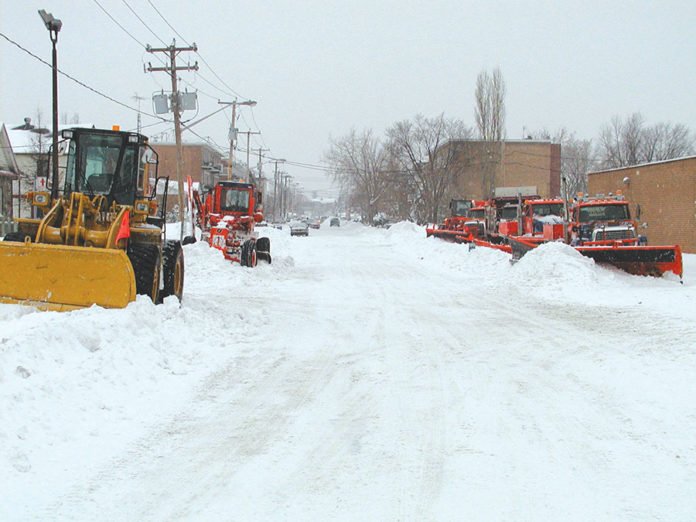 (TLN) In a wide-ranging document explaining its snow removal operations, the City of Laval says the goal of its efforts is to provide a snow removal service that is even and equitable across Laval’s territory.

According to the policy, norms are established to see that snow removal is conducted within a certain time frame.

However, in cases involving snow storms and other extraordinary weather, delays can be longer and snow and ice removal operations can take more time on the City of Laval’s more than 3,000 kms. of streets and 1,100 kms. of sidewalks.

The city’s snow removal services has developed a classification of areas and streets where snow removal takes place in accordance with their priority and importance. At the top (P0) are reserved lanes on boulevards and streets, followed by (P1) major arteries, bus routes and hospitals. The next category (P2) includes collector streets, hills, curves and streets where there are schools. Laval’s residential streets come last in snow removal priority.

The city notes that snow and ice removal operations conducted during the day or night will differ in certain respects because of the varying conditions. As they note, traffic conditions vary, the temperature is lower at night, and street parking can affect the efficiency of the operations.

According to the city, spreading salt and abrasives on Laval’s many roads and sidewalks “is an art rather than a science.” Factors such as temperature, time of day, weather conditions, cloud cover, sunlight and traffic density all can have an impact on the effectiveness of salt or sand spread on sidewalks and roadways. Again, the city’s public works department prioritizes salt and sand spreading depending on the type of precipitation that has fallen and to what density it has accumulated.

For snow removal on streets, the city has established three levels of priority. They are based partly on the amount of snow precipitation, ranging from 1.5 to 5 cms., 5 to 10 cms., and 10 cms. or greater. The city notes that during evenings and weekends, snow removal will be limited by the fact that most of Laval’s residential streets are lined with parked cars during these periods.

Regarding accumulated snow banks (a sore point for a good number of residents of Laval), the city says in its explanatory document that the height of banks will be proportional to the amount of precipitation received as well as the width of the street.

“Responsibility for clearing the snow bank in the vicinity of driveway entrances belongs to the citizen, regardless of the height, width or weight,” they say. “When it is possible, the bank is spread evenly on each  side of the street. In the case of a one-way street, the snow bank is prioritarily placed to the right.”

Regarding sidewalks, the city says the majority of them have snow removed based on two priorities and various types of situation. The city’s public works department takes into account the amount of snow accumulation as well as ice build-up when deciding how to proceed. Again, according to Laval officials, snow removal and de-icing of sidewalks won’t be as efficient during nights and on weekends since parked cars make these operations more difficult.

Removal by truck of snow starts when the ground accumulation reaches 15 cms., says the city, although it can take place in some areas for as little as 10 cms. For security reasons, it is mandatory to carry out snow removal by dump truck in the following areas: bridges, overpasses, schools zones, major boulevards, areas where there are large apartment and multi-unit residential complexes, reserved street lanes and areas outside Metro stations.

The city’s explanatory document singles out residential streets such as crescents, islands or dead ends as being areas where the trucked removal of snow only takes place under special circumstances (such as when accumulated snow has become excessive) “or for security reasons,” states the city.

The city says snow accumulation outside bus shelters is dealt with within 24 hours of a 10 cm. or greater snowfall. However, they point out that the following areas are not cleared of snow by the city: staircases, bicycle paths, pedestrian pathways and parking spaces for persons with reduced mobility. For obvious safety reasons, fire hydrants must be cleared of snow so that their upper portion is visible. With this last thought in mind, the city reminds Laval residents of some of their responsibilities during the winter, which include keeping fire hydrants free of snow. As well, it is forbidden to dump snow from a private property onto the street or other public right-of-way. Regarding wintertime car shelters, the city also points out that shelters must be installed with at least two feet distance from the sidewalk, or four feet from the road’s shoulder in rural locations.