For newly-elected Coalition Avenir Québec MNA for Sainte-Rose Christopher Skeete, a recent visit to the Agape English-Speaking Senior Wellness Centre was also a return to the neighbourhood where he was born and grew up.

“I was born and raised in Chomedey,” Skeete told a large crowd of supporters of the centre on Notre Dame Blvd. who gathered there on Nov. 26 to welcome Skeete who was making his first official visit since the Oct. 1 provincial election. He was accompanied by Chomedey MNA Guy Ouellette.

Was raised in Chomedey

Although he spent part of his childhood in the Cartier Blvd. sector east of Chomedey Blvd., Skeete said he lived as well on Haïfa Ave. a few blocks west of Curé Labelle. At one time, he also lived on nearby Dover St. and his mother worked on MacDonald St. Some of Skeete’s memories of Chomedey were a veritable trip in time down memory lane.

“I remember coming to the Récréathèque and bowling,” he said, referring to the massive former recreation centre, which was for many generations a proud landmark at the corner of Curé Labelle and Notre Dame boulevards, although it has been an abandoned eyesore for years.

“My younger years were in Chomedey and then I moved away to Sainte-Rose – specifically to Fabreville and then a little bit in Auteuil and Vimont. I consider myself a Laval guy, but my youth was in Chomedey.” Skeete, who was appointed head the new CAQ government’s Secretariat for relations with English-speaking Quebecers, explained the role. 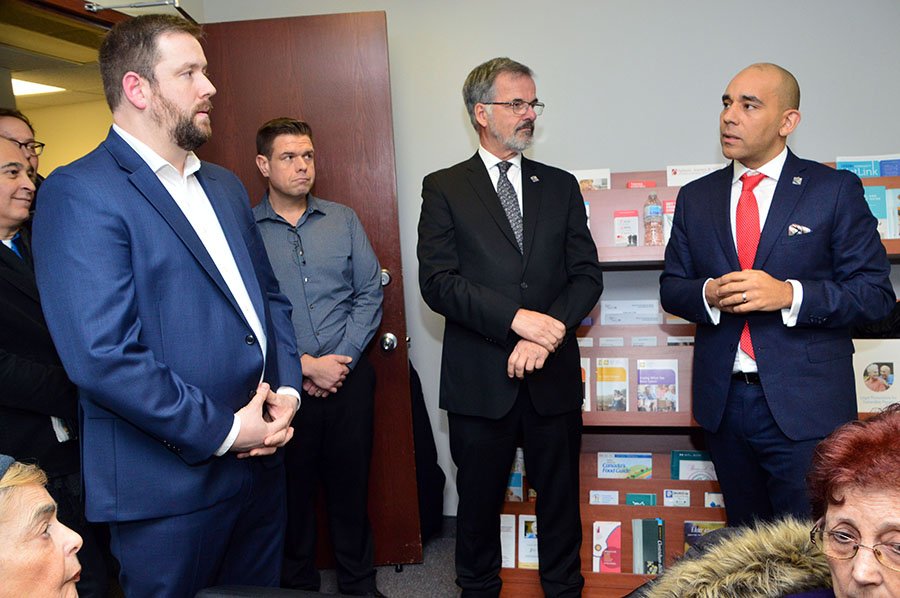 “Basically what it means is it helps us, the Quebec government, focus on how impacts on policy and decisions that the government makes on a day to day basis, how they’ll affect the English-speaking community,” he said.

“Historically we saw in previous governments that some of the impacts of decisions such as centralizing big institutions or what not would have an adverse effect on English-speaking Quebecers,” he continued.

“And sometimes it wasn’t within the reflex of the Quebec government to consider how those things would be impacted. So the secretariat helps by doing studies and doing research to make sure that we’re able always to consider the impact that our decisions are going to have on the English-speaking community.”

Skeete told the seniors, “Honestly you should feel very reassured our government is committed to keeping the secretariat, and is also committed to making sure that all our decisions are always viewed through the eyes of the English-speaking community.” Skeete said that being elected in Sainte-Rose “is the greatest honour of my life.”

During a question and answer period, longtime Chomedey resident Nick Furfaro told Skeete the CAQ government has “a solution in search of a problem” when it is seriously considering passing new legislation to deal with the display of religious symbols in the public context. “Don’t you think that the kind of measures that you’re trying to pass go far beyond the reality?” Furfaro said.

Another longtime Chomedey resident, Martin Berman, said he regarded the CAQ’s religious symbols stance as “very hypocritical” considering that the government’s intention targets all religious symbols in the province, except in one place: the Quebec National Assembly, where a crucifix continues to hang behind the assembly speaker.

“This is a Christian province,” Berman noted, suggesting that the CAQ’s message to minorities is “your symbols are all gone but remember: Christianity is here. That’s wrong. If you’re going to have Christianity in the Parliament, you should also have Jewish symbols, everything else there is in the province in the National Assembly. If it’s good enough for the National Assembly to have a cross, it’s good enough for it to also have Arab and Sikh and everything. Don’t tell me that this is not hypocritical.”