REM stations in Ste-Dorothée and Île Bigras delayed until 2024 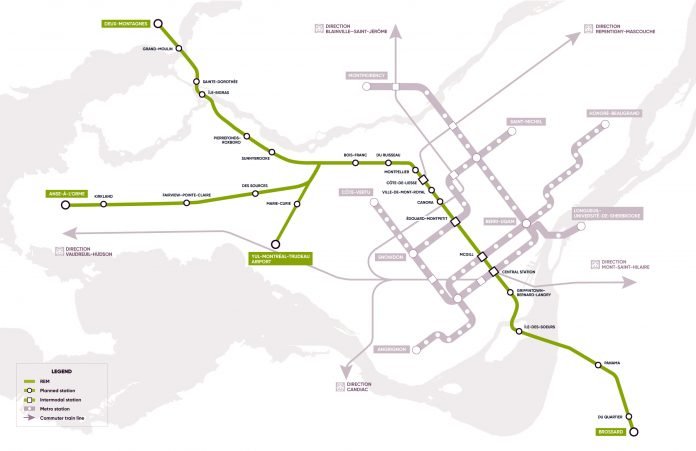 Residents of Laval who are looking forward to getting aboard one of the Réseau express métropolitain’s new rapid transit trains at future Laval REM stations in Sainte-Dorothée and on Île Bigras will have to wait another four years, according to REM officials who delivered a progress report last week on the multi-billion-dollar project.

During an online meeting with media, CDPQ Infra and REM project managers went over the work completed in 2020. They presented a revised schedule that takes into account the impact of COVID-19, as well as two major issues identified as problematic in the Mount Royal Tunnel during its modernization for REM train traffic.

REM construction is spread out over more than 20 construction sites across the greater Montreal region, with more than 2,000 workers and professionals on the job. According to CDPQ Infra, major milestones were reached in 2020, with the launch of Alice – a tunnel boring machine – toward the airport and the arrival of the first four REM cars.

Following a COVID-19-related analysis conducted in the last few months, said REM officials, a work shutdown period in early spring, with the implementation of health measures due to the pandemic, together with the impact on the mobility of a specialized workforce, and the impact on the supply chain, resulted in an overall delay of approximately three to six months for all REM construction sites.

Making up for lost time

CDPQ Infra says teams are working diligently to find ways to make up for lost time. While the pandemic is still ongoing, the company says the REM project office continues to closely monitor the situation with relevant authorities.

According to the company, the complete closure of the Mount Royal Tunnel last May made it possible to begin construction work required to modernize the century-old tunnel and add two stations in the heart of Mount Royal. However, acquiring full and safe access to the tunnel led the construction crews to identify two major and unforeseen safety issues.

On July 20, as excavations began inside the Mount Royal Tunnel, an unexpected detonation occurred. Work was immediately suspended and no workers were injured, said the company. However, an investigation and enquiry revealed the most likely cause was that REM workers had inadvertently hit upon an old bore hole containing an explosive charge dating back to tunnel construction in 1912.

But that was not all. While conducting inspections in the tunnel in downtown Montreal, the teams also noted extensive structural degradation of the tunnel walls. Since no waterproofing membranes had been applied over the years, it was noted that de-icing salts used on McGill College Avenue above had infiltrated the concrete and corroded steel columns and beams in the vault, creating an advanced state of decay.

The company said the deterioration called for immediate measures to avoid potential risks to the structural integrity of McGill College Avenue and required major reinforcement work. The tunnel will therefore be reinforced from the inside to ensure it remains structurally sound.

CDPQ Infra says the safety issues that arose in the Mount Royal Tunnel are not only slowing activities due to the strict safety measures to be used for drilling 30,000 planned bore holes, but also due to the added task of reinforcing the southern section of the tunnel. Therefore, the REM segment between Central Station and Du Ruisseau Station will only be opened in the fall of 2023, rather than spring 2022.

The company says the delayed work at the Mount Royal Tunnel will also affect opening the West Island, Deux-Montagnes and airport branches, since the tunnel lies in the central segment. The completed REM segment up to Deux-Montagnes, which includes REM stations in Sainte-Dorothée and on Île Bigras, will thus only be put into service in the fall of 2024, rather than at the end of 2023 as previously planned.

Laval and Deux-Montagnes work completed and in progress in 2020: