Ouellette hopes his new book blows the lid off UPAC 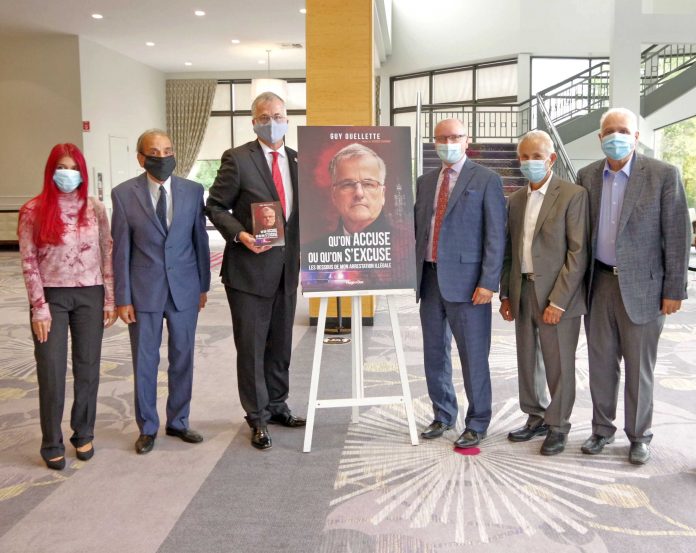 If it’s been a while since most people in Quebec heard news from the province’s Unité permanente anticorruption – better known as UPAC – Chomedey MNA Guy Ouellette – a former Securité du Québec police investigator who, ironically, is not a fan of the anti-collusion police – is drawing UPAC back into the spotlight with a new book-length exposé, as well as a lawsuit that got underway on the same day last week as the book launch.

“Today marks the end of some hard work that started 10 months ago,” Ouellette said in an interview with The Laval News during a media and by-invitation event held last week at the Château Royal convention centre in the heart of the riding he represents.

Ouellette, who spent a significant part of his three decades in the SQ investigating the Hell’s Angels and other criminal motorcycle gangs, says his new 336-page work, Qu’on accuse ou qu’on s’excuse: Les Dessous to mon arrestation illégale, could finally blow the lid over what’s left of UPAC.

The book’s foreword was written by former National Assembly Speaker Jacques Chagnon, who had previously come vigorously to Ouellette’s defence.

Ouellette said the book focuses primarily on facts, which he hopes will be put to good use by the Bureau des enquêtes indépendantes (BEI), a Quebec agency that looks into police wrong-doing, to guide them in their investigation of the circumstances that led to Ouellette’s arrest by UPAC in October 2017 on suspicion he was involved in a leak of information at UPAC.

Despite the arrest, Ouellette was never charged.

First elected as a Quebec Liberal in 2007, Ouellette currently sits as an independent member of the National Assembly. He was expelled from the Quebec Liberal Party caucus shortly before the 2018 election, after news reports claimed he had leaked information about the Liberals to the Coalition Avenir Québec, who won the election. Premier François himself maintained that Ouellette furnished information to the CAQ.

“It’s insight also,” Ouellette added regarding the book, noting that its conclusion raises serious questions as to whether UPAC is needed nine years after the department was created by the then-Liberal government. The other question Ouellette raises, as suggested in the book’s main title, is whether he will receive a formal apology from the province’s current Premier, François Legault.

‘I’m not the leak UPAC was looking for,’ says Ouellette

As Ouellette noted, the title, in fact, quotes word-for-word the phrase used by Jacques Chagnon in the National Assembly on Oct. 31 2017, during a response to Ouellette’s arrest. At that time, Chagnon said, “An MNA has suffered a serious blow and his reputation has been tarnished. […] May charges be brought, or may public apologies be made. May he be charged or may apologies be made.”

Chagnon’s remarks, as well as a unanimous standing ovation Ouellette received from members of all parties in the National Assembly, were viewed as a strong reaction by the province’s elected representatives to what they saw as an ominous threat posed by the police towards parliamentarians.

Regarding the UPAC leak, Ouellette adamantly maintains he was not the source. “I’m not the leak UPAC was looking for,” he said. “I have nothing to reproach myself for.” In addition, Ouellette claims that because UPAC wants to safeguard the identity of the actual source, they are refusing, “But they know,” he said, while also claiming that some media outlets are also well aware of the source’s identity.

Further to this, Ouellette pointed out that in February 2018, when he was called to testify during court proceedings in Quebec City in a fraud and abuse of power case pending against former Quebec Liberal cabinet minister Nathalie Normandeau, he swore under oath that he neither knew nor was he the leak’s source. He makes that specific claim again in his book.

In an added twist, the first court date for a libel suit Ouellette launched two years ago in conjunction with the UPAC arrest, naming the Quebec Solicitor General as defendant, was delayed until the very day of his book launch last week.