One of the largest fire halls in Canada by number of emergency calls handled officially opened on Souvenir Blvd. in Chomedey last week with a ribbon-cutting attended by Quebec Public Security Minister Francine Charbonneau as well as Mayor Marc Demers and several senior members of Laval city council.

Fire chief Robert Séguin referred to Laval’s new No. 2 fire hall as a “gift” filled with some of the latest firefighting technology. The $6 million building at the corner of Armand-Frappier Blvd. replaces the city’s crowded and long outmoded former fire hall which was located just a few blocks west on Souvenir Blvd. adjacent to city hall. 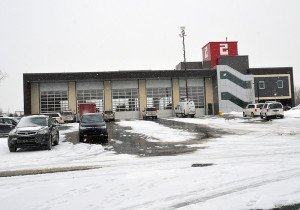 According to the city, new No. 2 fire hall is large enough that its services could be expanded as Laval’s “downtown” area develops and grows.

“The completion of this fire hall answers a real need,” the mayor said in an address to several dozen people, including current and retired members of the fire department. “The old fire hall, the most called upon of the nine fire halls on Laval’s territory, no longer had the space to assure operations could carry on optimally. This new building is notable for its technological modernism. It will allow the fire department to work in conditions that will be better to come to the rapid assistance of citizens.”

Located in the centre of Laval, the new fire hall meets standards established by Quebec’s Public Security Ministry for fire risks and firefighter response times, including the number of firefighters required to be on the scene for incidents. According to Robert Séguin, director of the fire department, fire hall No. 2’s size and strategic location are such that it will be able to accommodate more trucks, equipment and personnel in the future if needed. 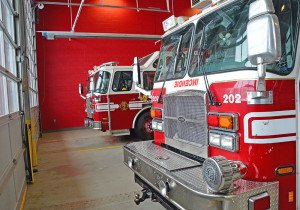 That could well come to pass, since the development of Laval’s “downtown” core is in full swing and will no doubt place increasing pressure on fire hall No. 2 as the area densifies. As it is, the new facility will be one of 10 of the most active fire halls in Canada, said Séguin, adding that it will be handling 7,000 calls annually. “I feel like a kid at Christmas who’s just received a nice gift,” he said.

Fire hall No. 2 is the second municipal building in the City of Laval to be built to Leadership in Energy and Environmental Design (LEED) standards. The first was the fire hall in Ste-Dorothée which was completed only a few years ago. LEED certification assures that a building has been designed and constructed with safe and sustainable materials as well as to maximize savings on energy consumption.