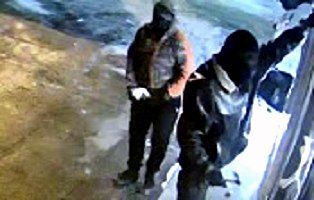 The Laval Police Department is asking the public for help to identify two suspects who attempted twice to set fire to a gas station located at 470  Chomedey Blvd. in Chomedey recently.

According to the LPD, on Jan. 26 not long after 5 am, the two suspects were spotted by a security camera set up at the gas station.

In the video, the suspects are seen approaching the station and tossing flammable materials towards the gas pumps, as well as at vehicles parked nearby.

Following this, they are seen breaking a window on the gas station building and tossing in more flammable materials, after which they flee.

The LPD says this was the second such incident at the gas station. On Jan. 9 around 4:45 am, two suspects were also seen attempting to start a fire, although they didn’t succeed.

The LPD said they don’t know if the suspects were the same individuals in both instances.