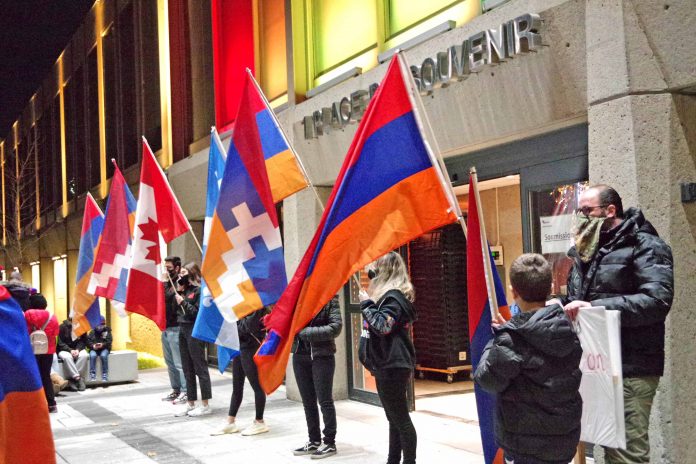 More than 135 supporters of the Republic of Artsakh, which is currently involved in an armed conflict with Azerbaijan, held a rally outside Laval city hall last Thursday evening, a day after Laval city council passed a motion recognizing the independence of Artsakh while condemning aggression by Turkey which is backing Azerbaijan in the conflict.

In passing the resolution, Laval became the first city in Canada to do so. In the past, Laval has also been among the cities and governments all over the world that took strong stands acknowledging the planned systematic genocide of as many as 1.5 million Armenians by the Ottomans during World War I, followed by Turkish denial.

The participants, carrying glass-enclosed candles – with many also wearing clothing bearing the Armenian national colors and slogans like “Artsakh Strong” – walked more than a kilometre in a torchlight procession, accompanied by a police escort, to the Armenian Community Centre of Laval on des Prairies Blvd.

Many in the Armenian community are hoping that the Canadian government will also recognize the legitimacy of the Republic of Artsakh, where more than 99 per cent of the population is ethnically and linguistically Armenian, with close ties to the neighbouring Republic of Armenia.

“We’re here to give thanks to the City of Laval for the courage they had to acknowledge the independence of the Republic of Artsakh, where as we speak a second genocide is boiling,” said Hovig Tufenkjian, president of the Armenian Community Centre of Laval.

“Armenians think that the only way to stop this potential genocide is in the recognition of the Republic of Artsakh as an independent state,” he continued. Tufenkjian said the Armenian community has every intention now of bringing the issue to the attention of elected officials at the provincial and federal levels.

“We must be united on this,” said Laval city councillor for Saint-Martin Aline Dib, noting her own Lebanese roots, while pointing out the solidarity that traditionally unites Lebanese and Armenians who share cultural roots. “It is important for us to stand up for the fundamental values we share and that we find peace.”

“I feel this is an issue which has become lost in the news, what with the American election and the COVID-19 pandemic,” said Laval city councillor Virginie Dufour who sits on the executive-committee.

“Unfortunately, it isn’t getting the coverage it should,” she added. “What we would like is that our federal government would a lot more outspoken on this situation which is truly appalling for the people over there.”