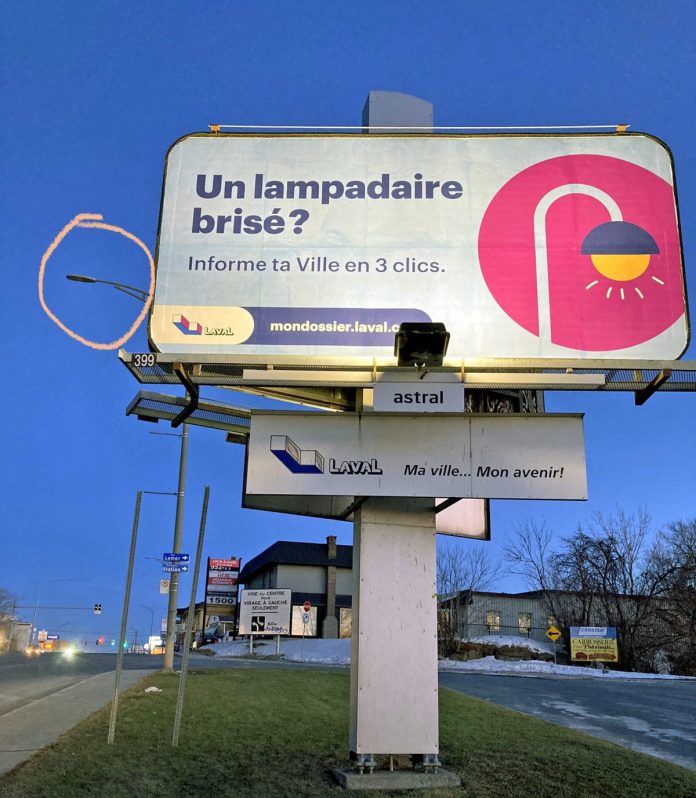 Responding to some recent coverage by the Laval News regarding malfunctioning street lights along des Laurentides Blvd. on an overpass over Autoroute 440, Hydro-Québec says delays caused by the COVID-19 pandemic have slowed their operations, but that the lights should be functioning in a few weeks time.

When Laval city councillor for Vimont Michel Poissant first reported the situation, a spokesperson for the City of Laval blamed the failure on incompatibility with Hydro-Québec electrical equipment, while saying the city was working towards fixing the problem as quickly as possible.

Poissant had drawn attention to the problem, noting that the city was encouraging residents to report broken streetlights through an online web portal or through a smartphone app.

Ironically, part of the City of Laval’s promotion campaign recently included outdoor advertising billboards, one of which stands on the edge of the des Laurentides Blvd. overpass, adding irony to the issue.

A spokesperson for the City of Laval said in an e-mailed response to questions from the Laval News that the city is doing its best to fix the problem.

“We are aware of the problem in that sector and we are actively working to fix everything,” said Anne-Marie Braconnier, adding that the city recently undertook a major program to furnish and install new LED street lighting.

“During the connection of these new lights, we ran into major a technical issue, this being an incompatibility with the existing Hydro-Québec network in this sector,” she continued.

“We are currently working in narrow collaboration with Hydro-Québec so that the situation gets fixed quickly, since we are aware of the importance of lighting in this very busy sector.”

When asked whether the city had set an approximate date when the lights would be operating, Braconnier added: “The city’s goal is to re-establish as quickly as possible. We do not currently have a date set. As stated previously, this requires coordination with Hydro-Québec and we are actively working on it.”

‘We will be in a position to carry out the requested work over the coming weeks,’ a Hydro-Québec spokesperson said

This week, in response to an e-mail from the Laval News, Hydro-Québec spokesperson Marie-Annick Gariépy gave the following explanation for the delay. “Hydro-Québec effectively received on February 11 2021 a request to connect the streetlights in question,” she said.

A fix in a few weeks

“Hydro-Québec must carry out modifications to the electric line and its equipment in order to reach a good level of tension required for the installation of the new lighting on the street. We are cooperating with the City of Laval in order to make the adjustments on the new network within the briefest delays possible. We will be in a position to carry out the requested work over the coming weeks. It should be noted that these delays are normal for this type of request which requires several stages (notably the drawing-up of engineering plans).

“In spite of our efforts, the months of slowdown of our activities because of the pandemic, as well as a number of new requests that are more important since the beginning of the year, have had the effect on our capacity to respond to all of these demands. In this context, we are doing everything we can in order to prioritize the requests to be connected for [households and businesses] moving and new construction.”