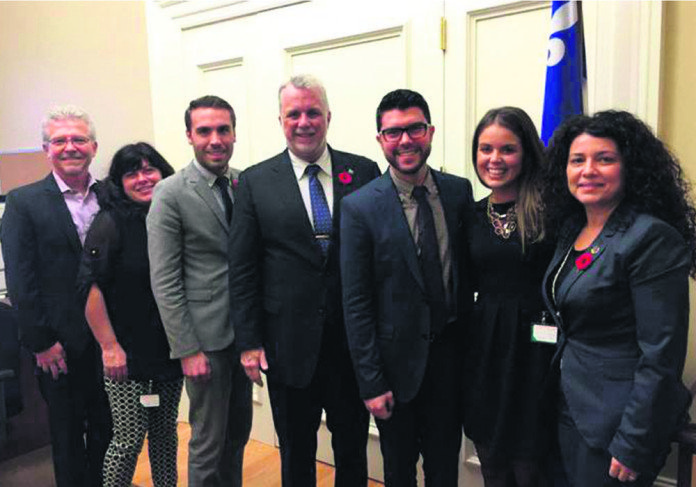 (TLN) Just before the Christmas holidays, Sainte-Rose Liberal MNA Jean Habel paid tribute in a speech in the Quebec National Assembly to the courage of Matthew Schreindorfer and his wife. Habel then had a surprise for them: a special meeting with Quebec Premier Philippe Couillard.

“One the one hand, I had wanted to thank Mr. Habel for his second statement as an MNA that he made in my honour,” Schreindorfer said. “I would also like to thank him for the meeting with our premier and for his support through all these ordeals.”

As previously reported in the Laval News, Matthew Schreindorfer was diagnosed with acute lymphoblastic leukemia (ALL) in June 2014. Since then, he underwent all the treatments possible within the Canadian medical system.

He underwent a further experimental treatment in New York City at a cost of more than $800,000 that he and his wife, Katia Luciani, raised from donors. Although he was declared cancer-free last September, Schreindorfer learned earlier this month that cancer cells have again been found in his bone marrow.

Habel said he was impressed by Schreindorfer’s ordeal. “I wanted to point out the combativeness, determination and strength of Mr. Schreindorfer and his wife which is an example and a source of inspiration for us all,” Habel said. “They have shown courage out of the ordinary all through this sickness and I wanted to show this.”