The students at Giant Steps School in west end Montreal got a special treat just before Christmas last month: the Montreal Canadiens’ star forward Alex Galchenyuk dropped by on Dec. 16 to hand out gifts, pose for photos and autograph souvenir items.

“I think this is a little bit different from being on the ice,” Galchenyuk told a small gathering of photographers and journalists who turned up for the event held at the Montreal region’s largest and best-known school for young people afflicted with autism spectrum disorders.

“But I think it gives me personally the exact same feeling as playing on the ice in front of 21,000 people,” he continued. “Whether you score a goal or not, you try to do the best you can and put a smile on the kids’ faces to make them happy and so that they enjoy their day.” 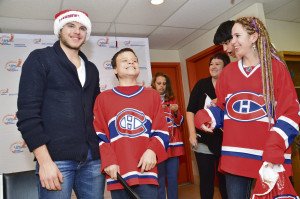 There are a lot of ways a professional athlete can make a contribution towards helping to make the world a better place, added Galchenyuk, “but by being here I can see these kids for myself and get a chance to talk to them.” Galchenyuk said he was impressed with the work accomplished at Giant Steps.

“What they do here is to try developing everyone’s full potential. I know that during my career there were a lot of people who pushed me on and helped make me who I am right now. My sister (Anna) has helped me to become involved in community events like this to get me to visit places like Giant Steps. That’s one of the reasons I’m here to help see that these kids get what they need to help fulfill their dreams in life.”

School director Thomas Henderson said the students and staff were thrilled to have Galchenyuk as a guest. “It means a great deal to us when people like Alex get involved in the community,” he said. “It raises awareness of our school and of autism in general. We’re always involved in different kinds of projects in the community: we’re working with municipalities as well as other organizations to try to bring support to the larger autism community. We do everything we can.”

Giant Steps Foundation board member Nicholas Katalifos also expressed his gratitude for the visit by Galchenyuk. “As a school community, we were thrilled to welcome Alex Galchenyuk to Giant Steps and were very impressed with his heartfelt interaction with our students,” Katalifos said in an e-mailed response. 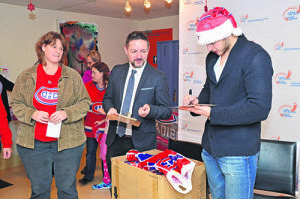 “Needless to say, the kids were very excited about meeting a local sports hero and the Canadiens organization has much to be proud of,” he added. “This was a wonderful way for us to end off an active and successful 2015 and we look forward to a new year that will include a major conference, continuation of our municipal project and annual auction.”