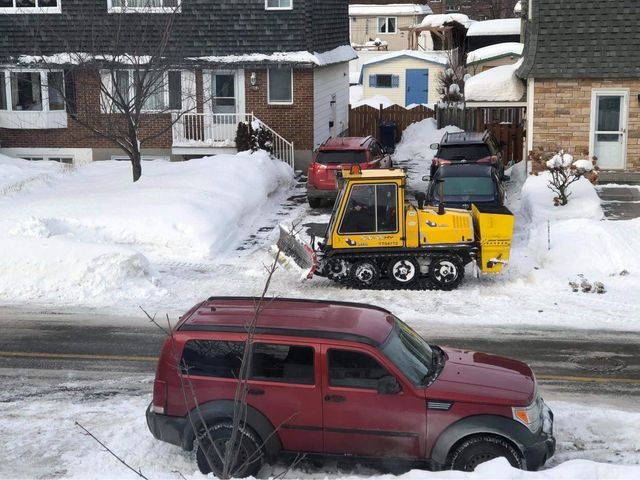 If anybody is in a position to understand snow removal problems in Laval, says former city councillor Raynald Adams, it ought to be him.

During the four years he served the residents of the district of Renaud, he says, he came to understand why poor snow removal was such a sore point for so many people, leading to complaints year after year.

Ex-ML critical of the party

What makes Adams’ criticism of the city’s current snow removal efficiency claims all the more scathing is that the party he sat with was the Mouvement lavallois – the administration, in other words – which is currently taking great pride in the vast improvements it claims to have made to snow removal service in Laval over the past two years.

In an interview with the Laval News, Adams maintained it’s not so much the council administration he has a problem with, but rather the public works department. “Even when I was the elected representative, I’d call them up and they’d just look at me and say that’s the best we can do,” he said.

According to Adams, the uncleared sidewalks force children heading to and from school each day to walk in the middle of the street, where inevitably they encounter motor vehicle traffic and danger.

It’s a recipe for disaster, he says, and a problem that could be fixed if not for what he claims is a breakdown in communications between district councillors and the public works department. “It’s an issue I raised as a councillor, and they have just never followed up on it,” he said. “There is a disconnect that was there even when I was a councillor.”

He blames at least part of the disconnect on the relationship between the administration and the unionized blue- collar workers. Adams said that even though he sat on the executive-committee, “I could not call public works. I was supposed to go through the general manager’s office. It could not be done directly.”

He said that even the city councillor who replaced him, Aram Elagoz (who is also with the Mouvement lavallois), “is not in a position to call public works.” In an interview with the Laval News, Councillor Elagoz acknowledged that he heard recently from Adams about the Hector Charland Ave. snow removal problem, and pledged to do something about it.

At the same time, Elagoz confirmed Adams’ claim about a disconnect between council and public works. “This is a reality,” he said, maintaining that the Mouvement lavallois implemented new safeguards, after the former Vaillancourt administration was ousted, in order to create a more formal chain of command to the public works department.

From Chomedey, the Laval News received the following message via our Facebook Messenger interface recently. “If only Laval would clean its sidewalks,” said the missive, written by a retired, long-time Chomedey resident.

“When we go out for our 3 km. walk, I should be walking on the sidewalk in Chomedey. But no, it’s either not cleaned of snow or left in a state of ice with no salt applied where I could fall and break a leg etc. If I walk on the boulevard instead, I could easily get hit by a vehicle and maybe killed. Lastly, being 80 if the above two don’t get me, COVID-19 could.

“In the sector west of Curé Labelle up to 100th Ave., north of St. Martin to Boulevard Cléroux, I find it very dangerous to go for a walk during the winter,” he continued, adding that the following streets with sidewalks on Boulevard Cléroux, Rue Légaré, Rue Favreau and 100th Ave. “are very dangerous” and “either the sidewalks are not properly cleaned of snow, ice has formed, [or] no salt has been applied and/or no aggregate.”

As the executive-committee member responsible for public works, Sainte-Dorothée city councillor Ray Khalil has the unenviable task of dealing with snow removal (and the numerous complaints it brings) every winter. Still, he maintains, two years after he was appointed to get the city’s snow removal act together, things have improved, and he has dozens of positive remarks and e-mails from residents to prove it, he says.

“Most councillors, if not all, have received a lot less complaints, and for the first time I’ve received over 20 thank you e-mails,” said Khalil, noting that he can back up the better snow removal claims with more than just testimonials.

“One of the main things I look at is the speed at which everything is removed with each snowfall,” he said. “In previous years there’s been snow storms where it’s taken us weeks to get the work done. Whereas now, almost everything gets done within a week. We’ve managed to cut the time by an important amount.”

Regarding the snowed-in sidewalks on Hector Charland Ave., Khalil said he was aware of the complaint, but insisted the sidewalks were cleared within 24 hours after the end of that particular snowfall, which he called “a reasonable delay.” Regarding the streets in Chomedey about which there were also complaints, Khalil said he was surprised, as the city’s snow removal crews had been paying particular attention to them this winter.

Regarding the alleged communication breakdown between public works and local councillors, Khalil said the system now in place requires residents with snow removal complaints to call 3-1-1 before anything else can happen. “The reason for that is that we don’t want any questions coming up about anyone playing favourites just because you’ve called your councillor and expect your street to be done first,” he said. “We want to normalize things so that it’s fair to everybody. If you see a problem, call 3-1-1. Then if it’s not resolved, call your councillor and we will get involved to try and fix the situation.”